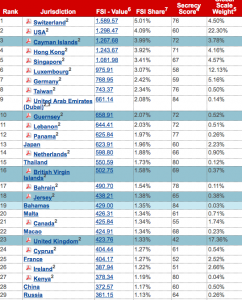 Every year the Financial Secrecy Index ranks countries according to their secrecy and scale of their offshore financial activities.  One immediate observation offered in response to this year’s rankings (hat tip, Fareed Zakaria) is the surprising place taken by the United States as second in the world, just behind Switzerland.  But a far more interesting (and curious) aspect of the list was the distant 23rd place occupied by the United Kingdom, which is commonly viewed as a tax haven of sorts—and the even lower 28th and 29th places occupied by China and Russia, respectively.  I suppose that precisely due to the authoritarian nature of some regimes, financial transparency can high since officials want to keep a tight control over their economy.  That said, the list isn’t exactly one that tracks the world’s countries according to the civil liberties granted their citizens (see above).